Common Types of Relays and Principles

What are the relays that can be divided according to the principle? The following Automotive Relay Manufacturer will take you to see these ten relays:

The signal relay is a commonly used device in the automatic control system. It is generally used to turn the circuit on and off. It releases the control command and reflects the status of the device by dropping the card. After the device returns to normal, the signal is released by the reset signal card. Important originals for automatic control and remote control circuits.

A relay in which the input and output functions are completed by electronic components without mechanical moving parts.

When the input signal is added or removed, the output part needs to be delayed or time-limited until the specified time to close or open the relay of its controlled line. A relay is an electrical control device that is an electrical device that causes a predetermined step change in the controlled output quantity in the electrical output circuit when the change in the input amount (excitation amount) reaches the specified requirement. It has an interaction between the control system (also known as the input loop) and the controlled system (also known as the output loop). 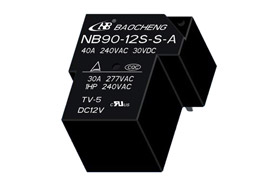 A power relay is a device that can make a transition in one or more electrical output circuits when the input (or excitation) meets certain specified conditions. It can be used in a neutral point direct grounding system as a directional component for zero sequence current protection. Power relay can be analyzed and researched according to the following points: shape and installation method; input parameters; output parameters; environmental conditions; electromagnetic compatibility; installation and use requirements.

When the speed of the wind reaches a certain value, the controlled circuit will be turned on or off.

When the acceleration of the moving object reaches the specified value, the controlled circuit will be turned on or off.

Previous: How to Buy a Good Relay?
Next: The T90 Relay is Patchy and Loves at First Sight!
CONTACT US
NINGBO BAOCHENG ELECTRONICS CO., LTD.
NEWS & EVENTS
FOLLOW US